I read Nelson Mandela's autobiography Long Walk to Freedom last year. It was one of my favourite books of the year. Here are a few excerpts:

I had been reading my speech, and at this point I placed my papers on the defense table, and turned to face the judge. The courtroom became extremely quiet. I did not take my eyes off Justice de Wet as I spoke from memory the final words. “During my lifetime I have dedicated myself to this struggle of the African people. I have fought against white domination, and I have fought against black domination. I have cherished the ideal of a democratic and free society in which all persons live together in harmony and with equal opportunities. It is an ideal which I hope to live for and to achieve. But if needs be, it is an ideal for which I am prepared to die.”

“Bearing this in mind and giving the matter very serious consideration I have decided not to impose the supreme penalty which in a case like this would usually be the proper penalty for the crime, but consistent with my duty that is the only leniency which I can show. The sentence in the case of all the accused will be one of life imprisonment.” We looked at each other and smiled. There had been a great collective gasp in the courtroom when de Wet announced that he was not sentencing us to death. But there was consternation among some spectators because they had been unable to hear de Wet’s sentence. Dennis Goldberg’s wife called to him, “Dennis, what is it!?” “Life!” he yelled back, grinning. “Life!

I never lost hope that this great transformation would occur. Not only because of the great heroes I have already cited, but because of the courage of the ordinary men and women of my country. I always knew that deep down in every human heart, there is mercy and generosity. No one is born hating another person because of the color of his skin, or his background, or his religion. People must learn to hate, and if they can learn to hate, they can be taught to love, for love comes more naturally to the human heart than its opposite. Even in the grimmest times in prison, when my comrades and I were pushed to our limits, I would see a glimmer of humanity in one of the guards, perhaps just for a second, but it was enough to reassure me and keep me going. Man’s goodness is a flame that can be hidden but never extinguished.

When I heard Angela Blanchard, CEO of Neighborhood Centres Inc, speak in 2011 she said “The human spirit can be dimmed but it cannot be extinguished”. I use that line often, and didn't see until now the connection to Nelson's words.

Nelson Mandela passed away today. In his memory let us all be the leaders the world needs us to be. Don't subscribe to the idea that we have a shortage of leaders, or sit waiting for the next Nelson to appear to make the world a better place. We are the ones we have been waiting for.

A leader is anyone willing to help, anyone who sees something that needs to change and takes the first steps to influence that situation – Margaret Wheatley 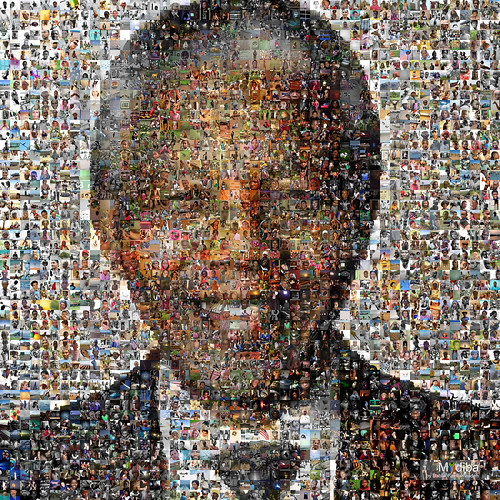